Ready to welcome visitors safely with the same warm hospitality and tropical bliss of Punta Cana.

During the time that travel was paused to the world due to COVID-19, the tourism industry in the Dominican Republic was hard at work carefully planning an even safer environment while still retaining the warmth, excitement, and tropical bliss that Punta Cana is known for.

On July 1st, the Punta Cana International Airport officially welcomed back visitors.  Punta Cana has set new standards in hospitality and continues to do so post COVID-19.  We are so proud to share that the Ministry of Tourism has worked with the tourism sector in order to implement the most comprehensive program for visitors to the Dominican Republic, setting a high standard across the Caribbean.

The Dominican Republic is the first destination in the Caribbean to offer health services and travel assistance in case a visitor needs assistance related to covid-19.  The Punta Cana International Airport has implemented the highest standards of sanitation protocols, social distancing, new modern equipment, and services in place to make every visitor feel safe, welcome, and taken care of from the moment they arrive.

For the most up-to-date information please see official updates.

…will be mandatory and no other method of providing the required information to enter the Dominican Republic will be allowed or be recognized as valid. The form is available in English, Spanish, French, Italian, German, Portuguese, and Russian and can be accessed through this link, more information for the E-Ticket here.  See the video below.

Passengers traveling from the UK are required to present a negative COVID-19 PCR test certificate issued not more than 72 hours before travel.  Travelers arriving without the PCR certificate have to take a test and quarantine for 7 days in a governmental facility at their own expense. Quarantine may be extended pending negative test results.  Please contact your travel booking agent before travel.

The Punta Cana International Airport is scheduled to receive 143 flights per week from November 1 to January 2, 2021, from 25 airlines and from more than 20 cities around the world, mainly from the United States and Canada.

According to statistics from the terminal, to date, they have on the agenda to receive nine daily flights (63 flights a week), and additionally, there are 80 weekly flights scheduled.

The number of flights could have an increase of up to more than 20% from mid-November and December, as some airlines have announced that they will increase the frequency of weekly or daily flights.

From December 16, Air Canada and Air Transat airlines will have a daily flight from Toronto and Montreal; American will have daily flights and two on Saturdays.

In addition, they will have in December the Tui Fly airlines from the Netherlands and Belgium. West Jet; Air Europe; Evelop and Sun Country.

Meanwhile, there have been 777 flights that the airport has received from March to October 19.

Everything is ready to implement in eight days the Responsible Recovery Plan for tourism, coordinated by the Ministry of Tourism. This was reiterated by Minister David Collado, who said that, except for a major cause, the plan will begin on September 15 with the announced measures, so it will not be necessary to present COVID-19 test with negative results prior to entry at airports to the country, as non-invasive random tests will be carried out, with a PCR test developed in Israel that uses the breath.

He stated that airports will have strict sanitary protocols with the measurement of temperature, distance and masks. 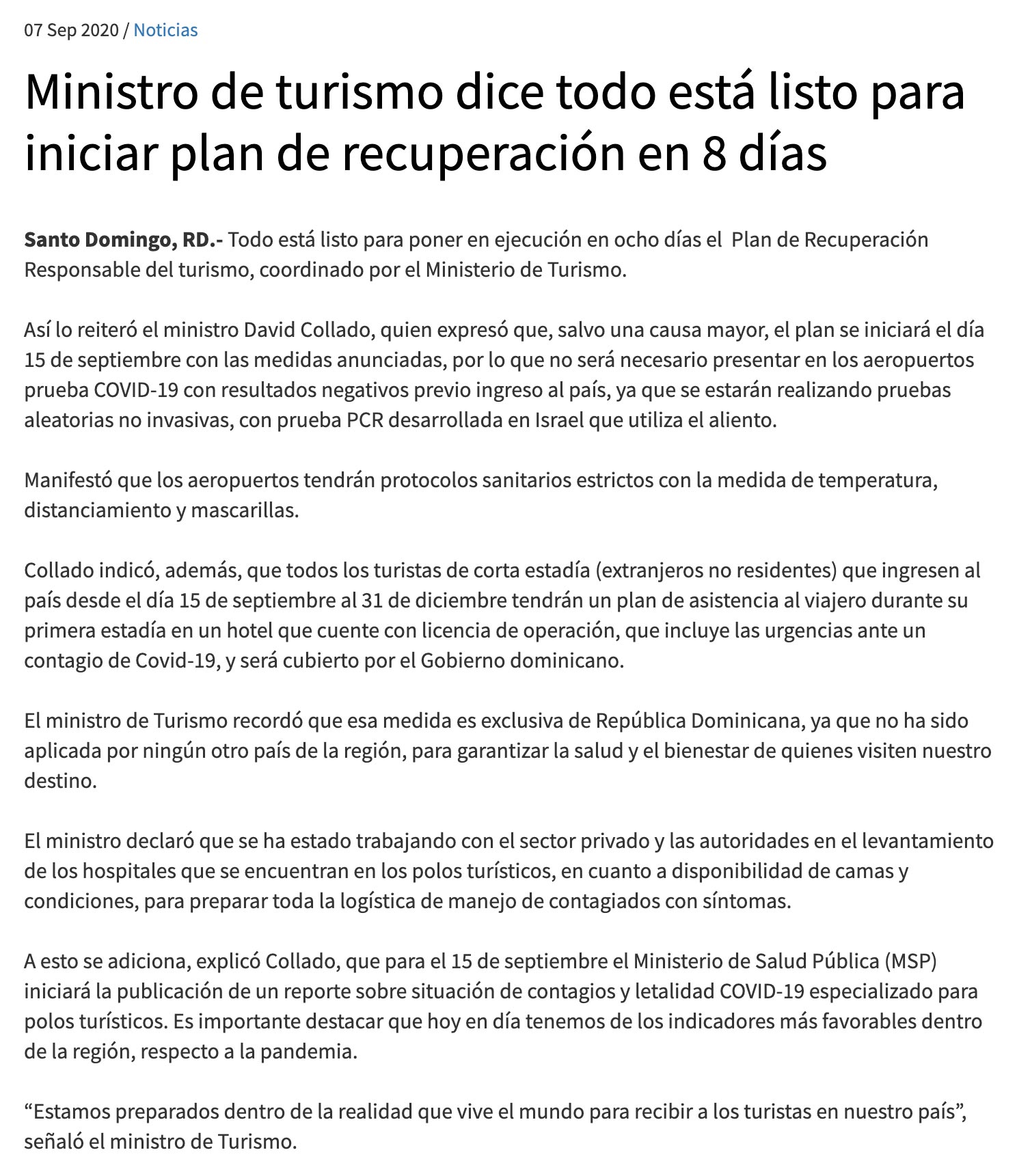 Collado also indicated that all short-stay tourists (non-resident foreigners) who enter the country from September 15 to December 31 will have a traveler assistance plan during their first stay in a hotel that has a license for operation, which includes emergencies in the event of a Covid-19 contagion, and will be covered by the Dominican Government.

The Minister of Tourism recalled that this measure is exclusive to the Dominican Republic, since it has not been applied by any other country in the region, to guarantee the health and well-being of those who visit our destination.

The minister declared that he has been working with the private sector and the authorities in the lifting of the hospitals that are in the tourist poles, in terms of availability of beds and conditions, to prepare all the logistics of handling those infected with symptoms.

To this is added, explained Collado, that by September 15 the Ministry of Public Health (MSP) will begin the publication of a report on the situation of contagions and COVID-19 lethality specialized for tourist centers. It is important to note that today we have the most favorable indicators within the region, regarding the pandemic.

“We are prepared within the reality of the world to receive tourists in our country,” said the Minister of Tourism.

Santo Domingo, RD.-President Luis Abinader called on all hotel chains in the midst of the “Responsible Reopening of Tourism” to open their doors as of October 1st.

The Minister of Defense, Carlos Luciano Díaz Morfa, the Minister of Health, Plutarco Arias, other government officials and members of the National Association of Hotels and Restaurants (Asonahores) also attended.

“Only three weeks have passed since we announced our Responsible Recovery Plan for the Tourism sector to the country and the rest of the world. With this plan we set a clear and precise objective: to minimize the negative effects of the pandemic on the creation of jobs, the attraction of new investments and the generation of added value in one of the most strategic sectors of our economy, ”said Abinader.

The president valued that there are already 1,176 flights booked to reach the Dominican Republic.

The Minister of Tourism, David Collado, stressed that from this date until December about 9,000 seats are being guaranteed and that 50% will be covered by this ministry and 50% by the business sector. These will be from the routes that already exist in the country.

He added that the Dominican Republic is the country with the best tourist offer and that with the theme of the attractions of the flights, the arrival of tourists will increase.

Authorities are also evaluating the curfew in tourist areas. 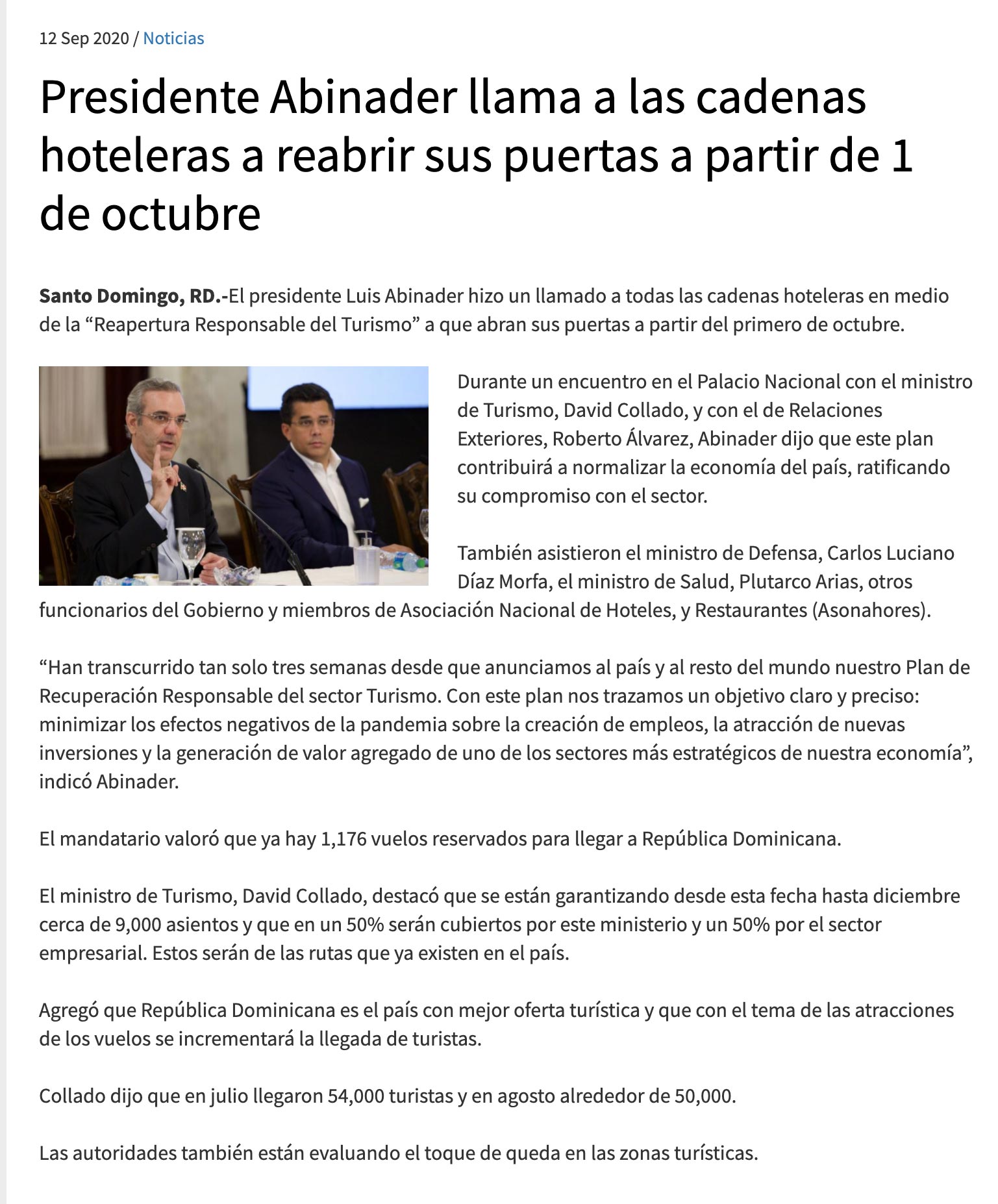 Dominican Government will promote recovery of the Tourism sector

The President of the Dominican Republic, Luis Abinader Corona, announced today a set of initiatives to address the challenges facing the tourism sector in the wake of the current pandemic and thus ensure that the country is a safe travel destination.

The Responsible Tourism Recovery Plan for COVID-19, led by the President himself, will contribute to caring for the health, well-being and safety of tourists and will also promote a sustainable recovery of the tourism sector.

“Our goal is to minimize the effects of the pandemic and promote a responsible recovery that prioritizes health, maximizes the potential for job creation and economic growth, and encourages the sector to continue to develop in a sustainable way,” he said. 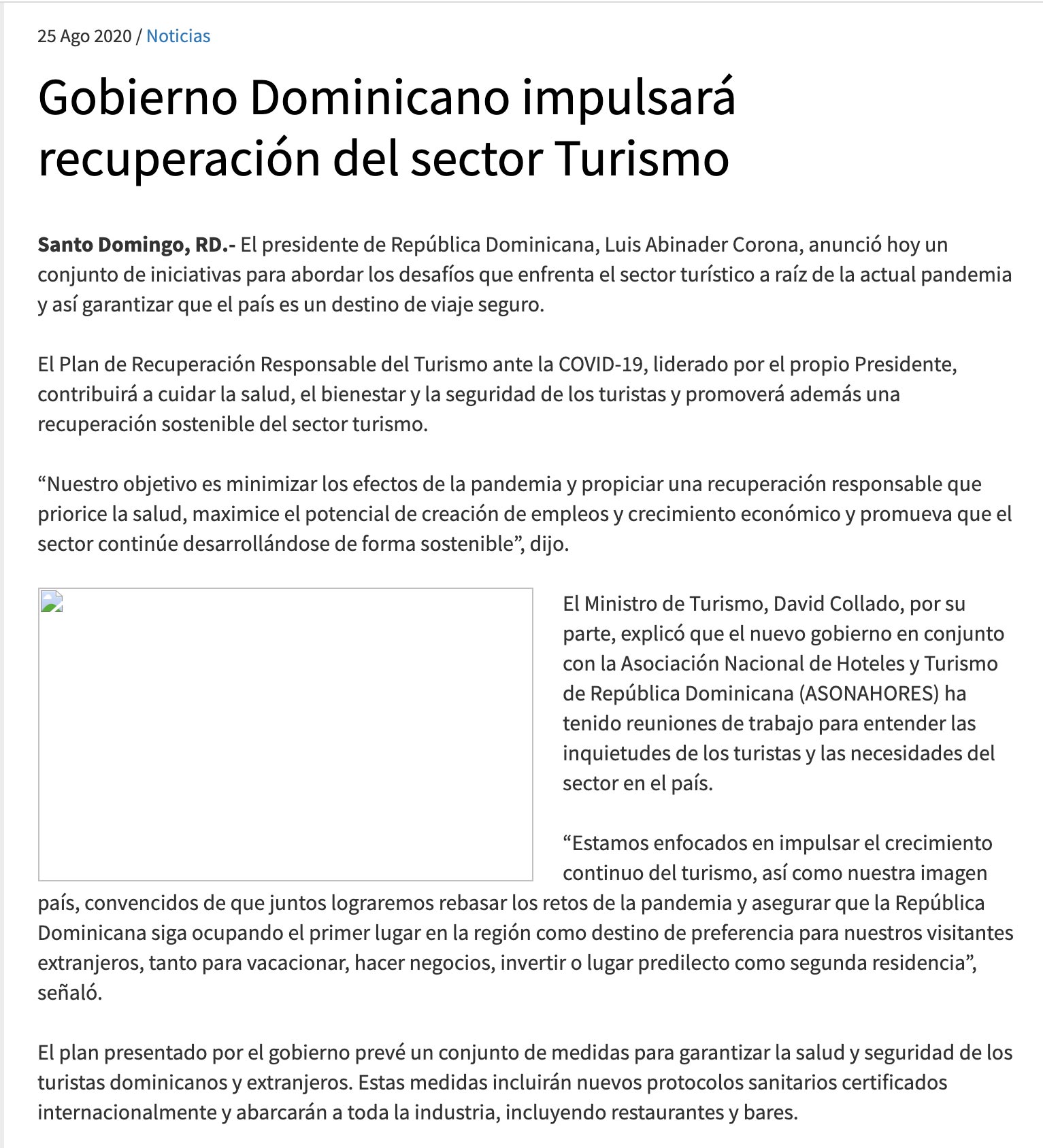 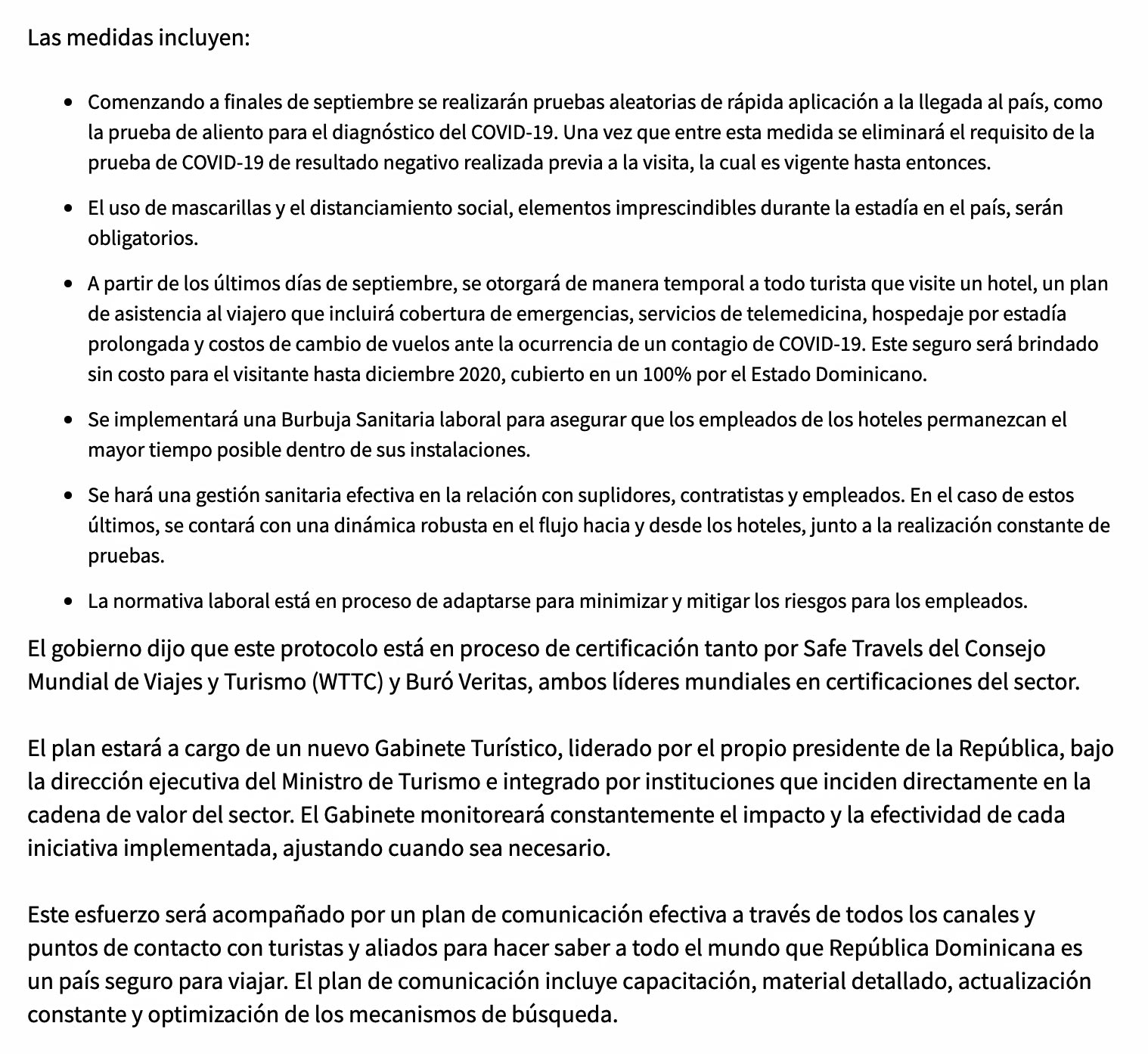 The Minister of Tourism, David Collado, for his part, explained that the new government in conjunction with the National Association of Hotels and Tourism of the Dominican Republic (ASONAHORES) has had working meetings to understand the concerns of tourists and the needs of the sector in the country.

“We are focused on promoting the continuous growth of tourism, as well as our country’s image, convinced that together we will overcome the challenges of the pandemic and ensure that the Dominican Republic continues to occupy the first place in the region as a destination of choice for our foreign visitors. , both for vacationing, doing business, investing or a favorite place as a second residence ”, he pointed out. The plan presented by the government provides a set of measures to guarantee the health and safety of Dominican and foreign tourists. These measures will include new internationally certified sanitary protocols and will cover the entire industry, including restaurants and bars.

The government said that this protocol is in the process of certification by both Safe Travels of the World Travel and Tourism Council (WTTC) and Buró Veritas, both world leaders in certifications in the sector. The plan will be in charge of a new Tourism Cabinet, led by the President of the Republic himself, under the executive direction of the Minister of Tourism and made up of institutions that directly affect the value chain of the sector. The Cabinet will constantly monitor the impact and effectiveness of each implemented initiative, adjusting when necessary. This effort will be accompanied by an effective communication plan through all channels and points of contact with tourists and allies to let everyone know that the Dominican Republic is a safe country to travel. The communication plan includes training, detailed material, constant updating and optimization of search mechanisms.

Links of Interest to Travelers